Those working on the

project back then, and I know I will miss some, were Regan Rowe W4FHI, Bob Thomas N4BX, Ervin Jackson N4BIG, and others at this writing. They did however instill in Discovery Place planning, the need for a Ham station at this facility. They were promised that the next addition would include the station and now the dream has been realized.

In 1987, Ervin Jackson N4BIG, attended a meeting of the Mecklenburg Amateur Radio Society urging the club to support and foster a Ham station in Discovery Place.

Bob Southworth KI4YV, planning retirement, contacted Freda Nicholson, Executive Director of Discovery Place, offering his services in the preparation of a feasibility study for incorporating an Amateur Radio station in the new building. Freda assigned Bob to working with the newly selected architect as a consultant for the radio room. A committee with our club president Wilton McAllister WB4PCS, Karl Boxer AB4BI, and Bob Southworth KI4YV, was appointed by our Board of Directors. Since Bob was available during working hours, he worked with the architect and reported back to the rest of the committee, which would periodically report on progress made and the time schedule, to our Board of Directors. Bob visited several Amateur Radio Exhibits on the east coast for ideas and mainly to find out what did not work. Several club members visited similar installations and reported to the committee.

Working with Discovery Place, a three stage program was established. Stage one covered the design of the station, purchase of equipment, and installation. Bob chaired responsibility for stage one. Stage two was the fund raising and promotion of the project. Ervin Jackson chaired this stage which started upon approval by Discovery Place of the final plans and specifications, letting of bids, and acceptance of contracts to build. Stage three was recruitment and training of volunteer Amateur Radio Operators to operate and display the station to the general public. This stage will be a continuing operation as long as the station exists. Originally Bob Southworth chaired this responsibility.

The station was opened on November 1, 1991 with a Special Event station. The Special Event started at noon and lasted 24 hours, until noon November 2nd. Approximately 300 stations were worked and QSL cards and certificates about Discovery Place were sent out.

on Sundays. At first this goal was achieved by a lot of work by Bob Southworth, David Lewis K1CBB, Bob Darke W4MHF, and Gary Fitzner KY4D. A complete staff was then trained and assigned to keep the station open everyday except Thanksgiving and Christmas. We are still looking for retirees to operate the station during working hours, and other Hams for weekend duty once a month.

The station visitation varies from day to day, some days being very crowded and others very light. Several foreign Hams have visited the station, and almost every day we have a visit from a Ham from our local area or around the U.S. Many come to operate the station, just bring a copy of your license, sign our operator book, and operate a top quality station with your own callsign and privileges. You meet the most interesting people at the Amateur Radio Education Center.

There were two early programs presented. One was for a Boy Scout Troop. We talked about what Amateur Radio was about, how they could become Hams, what Hams did during emergencies. Then we talked to several Hams around the United States. The other special program involved a group of foreign students and showed Amateur Radio involvement in international emergencies. A demonstration of working overseas stations followed to say hello to several foreign stations.

The following local Hams not mentioned above participated one way or another in getting the station on the air. If I missed some one please forgive me since I know there were some that did not get their names on the roster for work details. The following we thank: Ralph Eubanks, Cathy Roberts, Mark Roberts, Jeffery Blythe, John Chaney, Clyde Weddle, John White, Andrew Hawkins, Bob Helms, James Bishop, Lionel Bryson, G.R.Sumrall, Karl Boxer, Ervin Jackson, Bob Southworth, David Lewis, Timothy Slay, Bob Reed, Gene Ribas, and Ted Goldthorpe.

Come on down and visit the station! 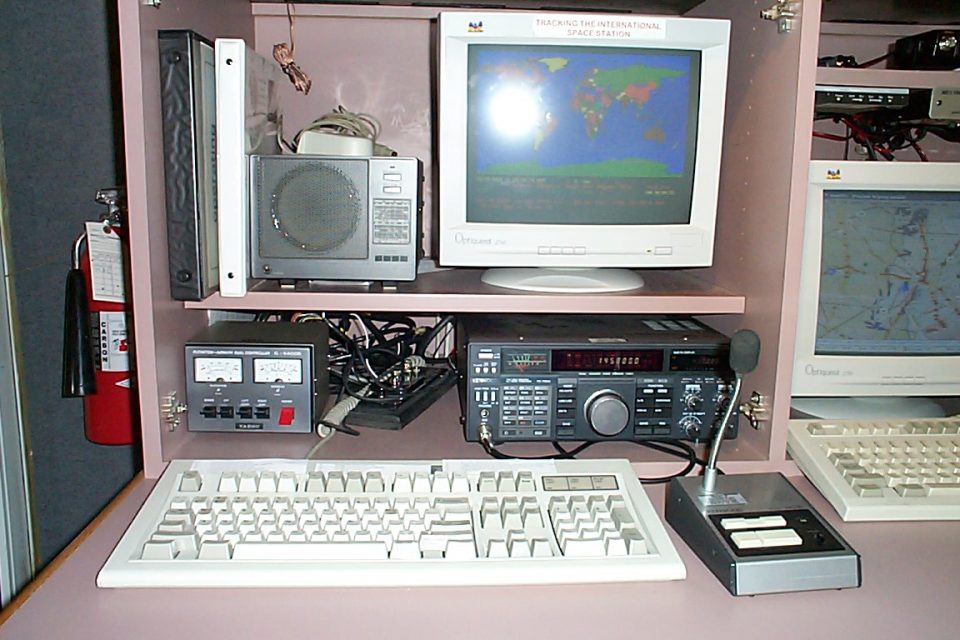 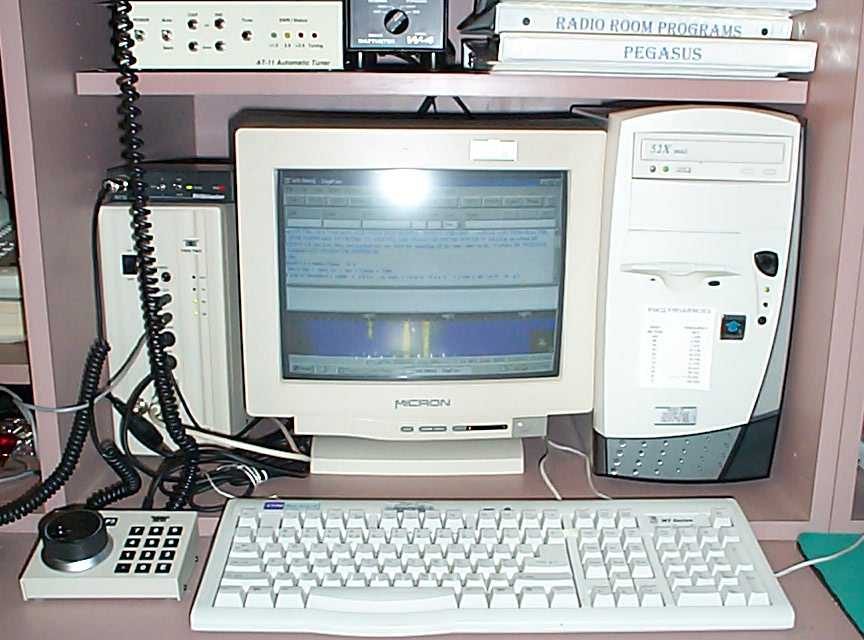 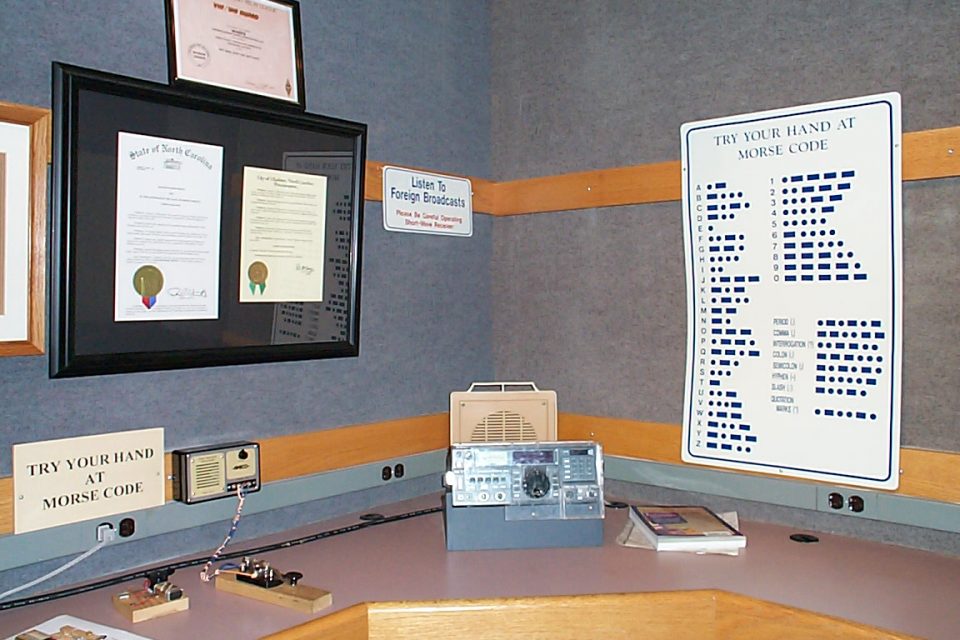 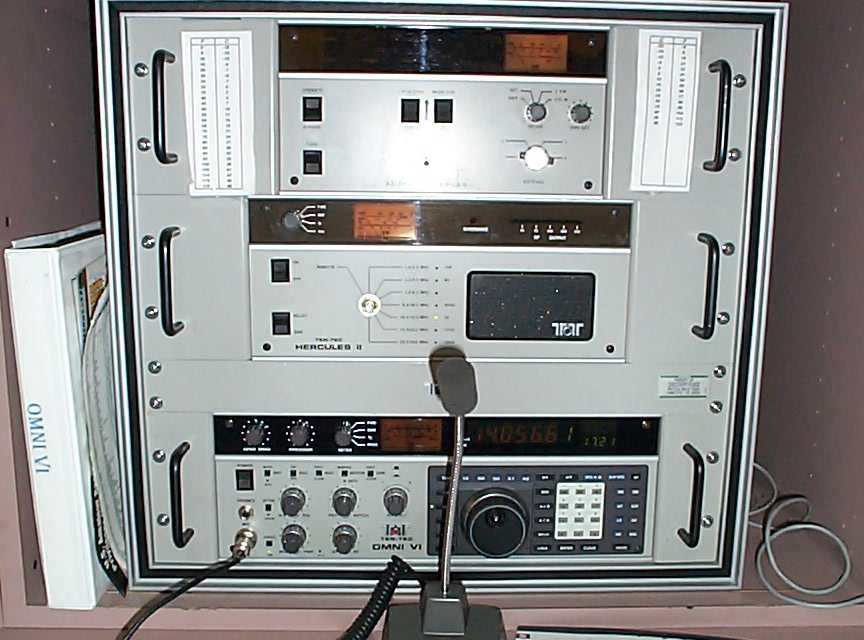 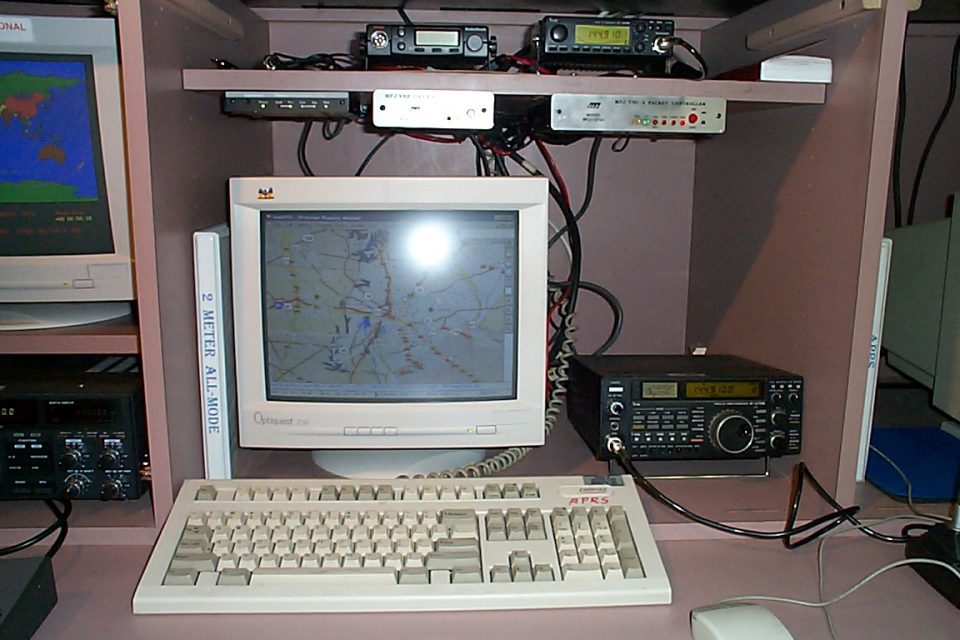 Well the restructuring has taken effect and guess what? Amateur Radio is still here and will be here in the future.

The restructuring will now see a number of Hams, that have never operated anything but a hand-held FM radio, move into a large new spectrum known as HF radio. The opportunities are almost limitless. While many opportunities were available in the VHF and up spectrum, few took advantage of them. I personally blame the amateurs of General class or above for not introducing new Hams to those opportunities that were available to them. Let us not repeat this failure at this new juncture in Amateur Radio.

To that end, we at our Discovery Place Amateur Radio Education Center are making major changes in selection of operating modes available. Here are some things we are doing:

These are a few of the improvements, but our main purpose is to introduce new operating opportunities to all amateurs and provide stations for those who have antenna and other deed restrictions at home.

Another reason for purchasing the Pegasus was the possibility of remote operation of the unit. The continued construction of buildings around Discovery Place will eventually deteriorate the operation of the station. With these new buildings come also more pagers, cell phones, and computer hash.

One of the projects of the future is experimentation of operating the Pegasus via wire and/or microwave links. We will be working with Ten-Tec staff to find the requirements and best methods. At present, Ten-Tec sees no problem when interfaced with a proper modem, and currently produced modems should do the job. Meetings with Discovery Place staff have determined the Nature Museum could be used for the equipment location operated remotely from the radio room at Discovery Place.

Exciting things are happening !! Come and be part of it and let us show you a whole new world of operating adventures.

Editor’s note:  Bob Southworth KI4YV has been our very active station manager since the beginning. Bob was there when our Board of Directors needed lots of encouragement that the station would happen. Without him it would not have happened. It has always been our commitment to provide good volunteer operators, any amateur license class holder is welcomed to operate at Discovery Place.

Mac Wood W4PVT has been our station personnel manager for many years. If anyone can spare some scheduled time each month to play radio and explain to people what we do, talk to Mac. If you cannot find time to volunteer, come visit as often as you can, bring your license and help us keep the finals warm. A warning however, talking with kids who have minds like sponges can be addicting.